Australia’s climate policy advisory recently suggested the creation of a fully transparent national carbon market. This may open the doors to global carbon trade and hint at a merger of voluntary and compliance markets.

With a recent change in Australia’s federal government, there has been a shift in the country’s position on climate change mitigation.

That new target is more ambitious than the opposition’s target of a 26% – 28% reduction over the same period.

This policy shift presents both risks and opportunities for entities doing business as the countries head toward being net zero by 2050.

One mechanism by which Australian businesses can reduce their emissions is via the Australian Carbon Credit Units (“ACCUs”) scheme. They can earn ACCUs by regenerating forests or buying them on the secondary market to offset their emissions.

The Carbon Credits Act 2011 established the Emissions Reduction Fund (ERF) which set up the ACCU market in 2011. This voluntary carbon market scheme seeks to incentivize entities to cut their footprint with ACCUs.

Skeptics believe that the voluntary scheme is a scam and a fraud as it lacks additionality for most of the credits. It means projects that generate carbon credits could have been done anyway without carbon financing.

The Emissions Reduction Fund designer Andrew Macintosh conducted several studies claiming that there are grave issues concerning the integrity of the ACCU scheme.

For instance, he estimated the “vast majority” of 30 million credits hadn’t captured any extra carbon than without the credits.

And so, the federal government did an independent inquiry into the ACCUs integrity last July.

The scrutiny of the ACCUs scheme includes looking into:

The inquiry coincided with the recent government policy shift that will likely increase the demand and prices for ACCUs.

In 2016, a Safeguard Mechanism was established, which allowed regulated emitters either use cleaner technology or buy carbon credits to offset their emissions.

This allows the pollution caps to tighten over time and gives companies time to adjust their operations to cut their emissions. The mechanism also allows firms to offset emissions by buying from other polluters who have extra credits to sell.

Currently, 215 of Australia’s biggest emitters have a cap on pollution accounting for 28% of the entire country’s emissions (501 million tonnes).

Critics claim that setting emissions caps on companies is like a “sneaky carbon tax”. That’s because if emitters exceed their limit, they’re obliged to buy offsets equal to the exceeded emissions. Otherwise, they have to pay penalties.

It is forecasted that companies under the mechanism are expected to spend $1.68 billion on new technologies and carbon offsets.

The Australian Climate Change Authority believes the publication of a “National Carbon Market Strategy” for Australia that will help ramp up emissions reduction.

The Climate Change Authority also found that the carbon market is fragmented, inefficient, and complicated. As such, the policy body’s CEO Brad Archer remarked that:

“It makes sense – and it is in Australia’s national interest – to play a leading role in the development of a liquid, high integrity and effective global carbon market… Bringing voluntary and compliance carbon markets together could help accelerate global decarbonisation and enhance the integrity of carbon offsets…”

The Authority recommends the government to publish a National Carbon Market Strategy. This particularly includes to:

The Authority also puts forward recommendations for the Government to consider, relating to the following areas: 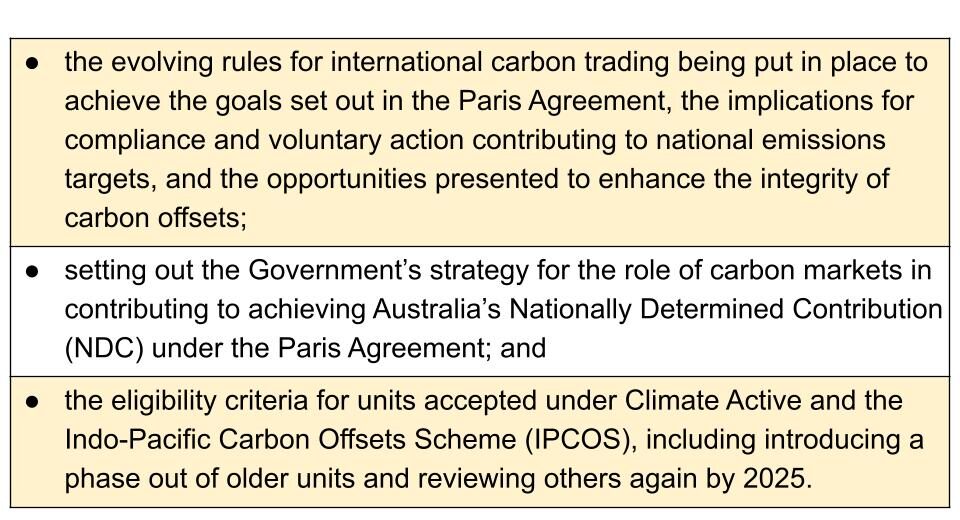 Summing it all up, Mr. Archer captured the vital point about the merge of both carbon markets in Australia saying that:

“With Australia adopting a more ambitious 2030 emissions reduction target on the way to net zero emissions by 2050, we can turn our minds to how governments and businesses can collaborate to achieve those goals as soon as possible and ensure Australia’s future prosperity.”

Global low-carbon or clean energy transition investment jumped 31% in 2022 with a total of $1.1 trillion, drawing level with capital for fossil fuels,...
Carbon Credits

The total value of carbon credits traded in the market to help entities achieve their net zero goals can be worth $1 trillion as...
CARBON INVESTOR EDUCATION
Carbon Markets