Stripe, Google will Invest $1B on Carbon Removal Technologies

Five of the world’s biggest companies commit to investing $925 million in carbon removal technologies between 2022 and 2030.

The Frontier is an advance market commitment (AMC). Its main goal is to speed up the development of carbon removal technologies. At the same time, building strong future demand for such technologies.

Frontier also aims to help carbon removal startups scale up and lower the cost of sucking in a ton of CO2 from the air. As such, it will benefit firms and people looking to buy high-quality carbon offsets.

Stripe, Alphabet, Shopify, Meta, and McKinsey provide the funding for it.

Why Risk on Carbon Removal Technologies?

There has been strong evidence saying that companies worldwide have to slash emissions. But cutting down CO2 emissions alone is not enough to hit global climate goals.

Removing carbon already in the air is also a must.

In fact, climate scientists said that we need to remove up to 6 billion tons of CO2 each year until 2050.

Plenty of supply for carbon offsets today involves removal using nature-based solutions. The most common is using forests to suck tons of CO2 but this has a high risk of offset reversal. Fires can reemit the captured carbon back into the atmosphere, making the offset not real.

This is where technological solutions come in but they are not yet scaled up and they’re pricey, too.

Still, if we don’t hustle and learn the real potential of those technologies, we’ll put the earth in a very dangerous warming condition.

In fact, the IPCC report on climate change is clear that we should act now. And that may also mean relying and risking on carbon removal technologies even if we don’t know yet their 100% potential.

Luckily, Frontier comes in and closes this gap using a model fine-tuned by Stripe for over 2 years.

The Frontier Way of Taking Risk on CO2 Removal

Developing and scaling carbon capture technologies is risky. It has the same risk that governments take when developing vaccines.

But governments tend to move slow and they can’t always afford to compromise the public funds on risky ideas.

So, what do private companies do to support critical innovations like this?

Here’s how Frontier does it.

Startups that have carbon removal technologies can pitch to Frontier through RFPs. Then a pool of experts from Frontier will assess those technologies using a set of criteria below. 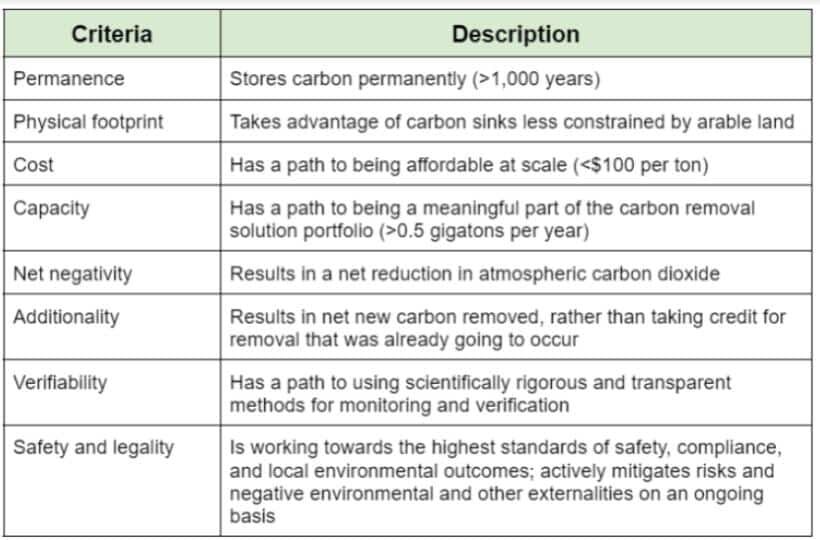 Once the experts are happy, Frontier then negotiates a price per ton of CO2 captured and delivers them as tons of offsets.

As the startups mature, they can use the purchase commitments to raise much more sum. They can then use it to build large-scale plants via debt markets with cheaper capital for less risk.

Frontier fund expires by 2030 but it still welcomes more investors to join and grow the money it can spend on more investments.

Stripe and Shopify have each run a Frontier-like fund that supported 14 ($7) and 22 ($30) startups. Conversely, Meta and Google used nature-based offsets to hit net-zero. But they’re showing interest in carbon removal technologies, too.

When it comes to cost, startups should be able to remove each ton of carbon at around $40 to $140.

The trend in carbon removal technologies seems to go up. Yet, this must not take away the world’s vital task of reducing emissions now.

Spending on emission reductions, in fact, had amounted to about $750 billion in 2021. That huge money went to investing in clean energy projects. In this case, a less than $1 billion investment to support carbon removal by 2030 fades in comparison.

So, scaling technologies that suck in carbon from the air and store it for good need a lot more money.