Google Flights will let you compare CO2 emissions as well as overall price.

These “sustainability initiatives,” as Google calls them, also apply to their “Things to Do” search results as well as simple searches such as for hotels. 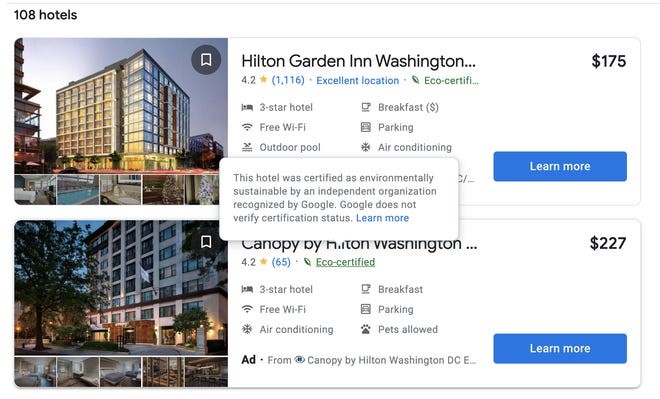 In other words, Google is taking a broad-brush approach that rewards green alternatives across the board.

“Google as sustainability leader” is the obvious conclusion, but something has been lost in the shuffle. Like all industry-leading companies, Google is both driving the market and responding to it.

In this case, Google’s own sustainability drives fit in with a broader, consumer-led green initiative that has slowly been building steam.

Before we sink into Google’s own initiatives, there’s an important question to be asked…

The debate divides even the staunchest anti-emissions voices.

Greenpeace condemns carbon offsets which are a key part of many green initiatives (more on that next week).

On the other hand, Greta Thunberg supports them, but the debate over green initiatives illustrates just how contentious – and how important – the issues are.

The debates are public, prolonged, and prolific – and that, more than anything else, is probably a good illustration of how deep the movement goes.

While that sounds great, the number breaks down a bit – only a quarter of those consumers actually follow through and regularly purchase environmentally-friendly goods.

There’s room for green initiatives to grow – but with over half of consumers at least nominally interested in going green, it’s no wonder that Google took steps to encourage that interest.

Green is Granular: Lessons from Google

So, what can we learn from Google?

Most of the coverage has, quite rightly, focused on the potential benefits stemming directly from Google’s decisions.

That’s still a drop in the bucket compared to the billions of tonnes of CO2 emissions produced annually.

But it’s a sizeable drop nonetheless.

Commuters can vote with their pocketbooks, using the market to reward lower-carbon flights and punish unnecessarily wasteful ones. It’s a type of Green social credit system.

Google’s changes across the board follow the same model. Maps will show routes that use less fuel and are responsible for lower emissions.

Google’s Shopping results will prioritize products that are energy-efficient, particularly for energy-intensive appliances.

Long-term, Google plans to add comparison tools that can calculate the impact of hybrid and electric vehicles against fossil-fuel counterparts.

In every case, Google appears to be basing its calculations on real-world factors: highways vs side roads, lower inclines routes, newer aircraft against older, less-efficient models. Google wants to “make the sustainable choice the easy choice,” as Sundar Pichai stated in Google’s announcement video.

It’s also the logical choice. Empowering the average consumer is the only way to turn the groundswell of support for green initiatives into a long-lasting green wave – that’s just as true for enterprise-level carbon offsets as it is for your next flight.