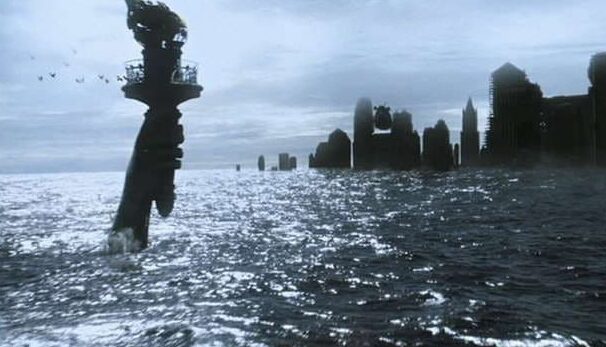 This November, government officials, business people, and activists alike will come together in Egypt for the 27th United Nations Climate Change Conference, also known as COP27 – short for Conference of the Parties 27. When you search for climate change history, you won’t go by without hearing or knowing about this COP.

The “Parties” referred to in that name are the signatories of the United Nations Framework Convention of Climate Change, which was first established in 1992 at the Earth Summit in Rio de Janeiro.

With all United Nations member states counted amongst its number, UNFCCC membership includes nearly every nation on Earth, including observers like Palestine and the Vatican.

The only entities that aren’t parties to the UNFCCC are unrecognized states like Kosovo, and most notably, Taiwan.

30 years have passed since the UNFCCC was first established. In the time since, what’s been accomplished, and what hasn’t? What will be discussed at COP27, and where will the world go from there?

To answer all these questions and more, let’s step back in time for a summary of how we ended up where we are, outlining a brief history of climate change.

One of the earliest scientists to foresee the potential impact of humans on climate change was Swedish scientist and Nobel laureate Svante Arrhenius.

A noted chemist of the late 19th and early 20th century, Arrhenius was the first to realize and calculate the impact of atmospheric CO2 on global temperatures – what we now know as the greenhouse effect.

Newspaper articles from the turn of the century. Source: The Selma Morning Times, 1902; Rodney and Otamatea Times, 1912

As you can probably guess, nothing really resulted from these early warnings. The blame for that, however, wasn’t entirely due to willful ignorance or profit-driven motivations.

Simply put, +100 years ago, there was far less CO2 being emitted into the atmosphere than there is today: 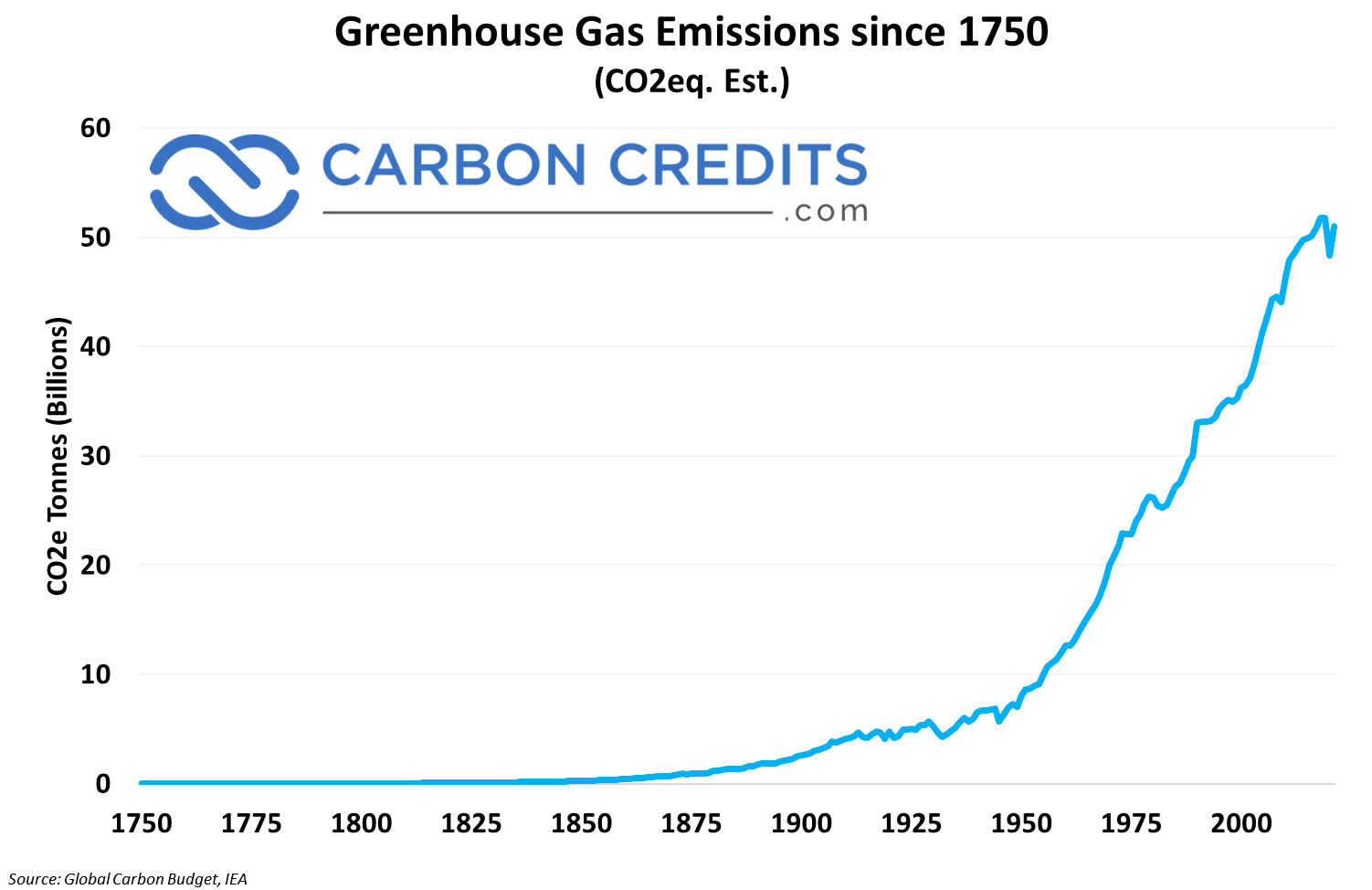 With the amount of greenhouse gases (GHGs) emissions on an annual basis worldwide at the turn of the 20th century, scientists calculated that it would be several hundred years before these emissions would start to affect the global climate significantly.

What they couldn’t predict, however, was just how quickly the pace of carbon emissions would accelerate.

A century later, CO2 emissions would already be over 13 times what they were when Arrhenius first made his calculations. And accordingly, the several hundred years’ worth of leeway mankind was thought to have would be dramatically reduced.

The Beginnings of Climate Awareness

It would take another half century for scientists to once again bring CO2 emissions to the table.

This time, they would be able to point to a steady rise in atmospheric CO2 levels. They’ll also bring other newfound knowledge, such as the fact that the ocean was less capable of absorbing CO2 than previously thought.

During a special event held on the 100-year anniversary of the American oil industry in 1959, scientist Edward Teller, father of the hydrogen bomb, had some prescient words to share with the several hundred oil tycoons, government representatives, and other scientists in attendance:

“At present the carbon dioxide in the atmosphere has risen by 2 percent over normal. By 1970, it will be perhaps 4 percent, by 1980, 8 percent, by 1990, 16 percent, if we keep on with our exponential rise in the use of purely conventional fuels.

By that time, there will be a serious additional impediment for the radiation leaving the earth. Our planet will get a little warmer. It is hard to say whether it will be two degrees Fahrenheit or only one or five.

But when the temperature does rise by a few degrees over the whole globe, there is a possibility that the icecaps will start melting and the level of the oceans will begin to rise. Well, I don’t know whether they will cover the Empire State Building or not, but anyone can calculate it by looking at the map and noting that the icecaps over Greenland and over Antarctica are perhaps five thousand feet thick.”

There was a little bit of fearmongering in Teller’s statement.

Today, we know that if all the icecaps were to melt, the resulting sea level rise would be around 60-70 meters – a far cry from being able to cover the Empire State Building, which sits at 443 meters.

However, just about all of Manhattan and Brooklyn would sit underwater:

A remarkably accurate rendition of what New York would look like if all the icecaps melted. Source: A.I. Artificial Intelligence, 2001

The COP26 in Glasgow last year marked the most important event in the history of tackling climate change. It forces organizations and individuals to take emissions reduction to heart.

But let’s leave all that aside for the moment and return to our history lesson on climate change.

Throughout the 60s, many more scientists would come forth with new calculations and warnings about the impacts of CO2 emissions on global temperatures.

In 1969, NATO would become the first entity to attempt to deal with climate change internationally. And while their efforts wouldn’t be very successful, it would mark the start of government regulation aimed at reducing emissions in countries such as Germany.

In the 70s, some anomalously colder weather in conjunction with worries that manmade particulate emissions (smog etc.) were causing a cooling effect resulted in confusion over whether humans were causing the world to heat or cool.

The general scientific consensus was that the evidence was inconclusive and more data was necessary.

But the mainstream media latched onto those few minority scientists who expected imminent global cooling following a series of particularly cold winters in Asia and North America.

This sensationalist reporting would damage the public perception of climate science as it became clear by the 80s that carbon emissions would rapidly outpace particulate emissions. Add to this that the minor global cooling trend of years prior had been reversed.

As a scientific consensus over global warming began to form through the 80s, one of the largest and most coordinated first efforts taken to protect the environment was the regulation and banning of chlorofluorocarbons (CFCs). This is perhaps the first significant mark in the history of climate change.

Previously commonly used as refrigerants and propellants, CFCs were discovered to play a serious role in the depletion of the ozone layer.

The ozone layer is, as its name suggests, a layer of ozone particles surrounding the earth in the upper reaches of its atmosphere. It plays an important role in preventing harmful ultraviolet radiation – the same kind that causes sunburns and skin cancer – from reaching the earth’s surface.

While only tangentially related to climate change, the depletion of the ozone layer may pose considerable danger. It causes increased cancer risks and other harmful effects to plants and animals alike.

The largest visible indicator of ozone depletion was the ozone “hole”, an area of significantly depleted ozone detected above the South Pole. At its lowest point, ozone levels in the Antarctic were up to 70% lower than they were before 1980.

The Montreal Protocol was established in 1987 and entered into force in 1989. It has since managed to reverse that trend, a huge achievement recorded on the climate change history front.

The Protocol has allowed the ozone layer above the South Pole to begin recovering by agreeing to phase out and later ban ozone-harming substances like CFCs and HCFCs.

NASA has since estimated that the ozone hole will be able to return to pre-1980 levels by around 2075. This makes the Montreal Protocol as the first major international success in the history of mitigating climate change.

It was also notable for just how quickly it was implemented. It only took 14 years from when the ozone hole was first discovered in 1973 to the agreement being passed in 1987.