The rise and fall of countless civilizations are due to access to two things: water and carbon. Both are essential for sustaining flora and fauna.

When arable regions become a desert wasteland, it shifts capital and populations. The world just surpassed 8 million people, and in the next 15 years it is expected to grow by another billion people.

Being able to reverse desertification will unlock new regions for development.

While turning a desert wasteland into a lush green carbon oasis seem like a massive undertaking, it’s already happening across the globe.

Desertification is the long-term degradation of dryland ecosystems by human activities, indirectly through climate change or directly through bad land management or overuse.

Desertification is a causing factor in the early human migration off of Africa. They followed the water and trees, much like the animals did.

Desertification has been identified as one of the top 3 environmental challenges back in 1992.

About 1/3rd of the Earth’s land is covered by desert (as determined by precipitation). All continents have deserts, yet their types and sizes vary widely.

Deserts are frequently among the least populated places on earth since they are thought to have challenging living conditions.

The 5 Largest Deserts Regions In The World

The biggest non-polar region is the Middle East and Northern Africa (MENA), the host of the largest subtropic deserts in the world – the Sahara.

The Sahara Desert has grown by 10% since 1920, and a third of its current size is due to climate change.

The overall MENA region is divided into the have or have nots – minerals reserves, oil reserves, carbon reserves (vegetation), and water reserves.

The region is surprisingly flush with water resources although it’s deep underground.

To get to this will need massive water drilling programs. Libya is building the “Great Man-Made River” the world’s largest underground network of pipes and aqueducts.

To extract this water resource, it needs to be economically viable, and carbon credits help tip the scales.

Water can help turn the deserts back into arable lands, this opens the immense potential for carbon credit generation from all the new greenery.

Carbon credit and biodiversity credits can improve the quality of life (in their region).

How do you control the temperature and climate?

The MENA region was once green and lush, but over time desertification occurred. There only remains a few oases serving as a reminder of the region’s former glory.

Fortunately, turning deserts back into arable regions can happen with proper planning and implementation of technology and nature-based solutions.

To stop the “spreading cancer” known as the Sahara Desert, a massive oasification project is already underway called the “African Great Green Wall”.

It’s an ambitious plan to develop a wide wall of trees to hold back the expanding Sahara Desert.

This 8,000 km natural wonder would cut across the whole continent of Africa from Senegal to Djibouti, affecting 11 countries along the way.

If completed, it would be the largest living structure on the planet. It’s 3x the size of the Great Barrier Reef.

The hope is that the trees will slow soil erosion, slow wind speeds, and help rainwater filter into the ground.

More fertile soils will help communities across the Sahel with land grazing and agriculture.

The African Green Wall hopes to reach its goal by 2030, but with funding drying up and regional disputes, its future remains in limbo.

African Great Green Wall’s execution has not gone as well as planned, with over 80% of the planted trees have died. Researcher Chris Reij stated:

“If all the trees that had been planted in the Sahara since the early 1980s had survived, it would look like Amazonia.”

Another MENA nation that is making major moves towards bringing back arable land is oil-rich Saudi Arabia.

Not too long ago the Middle East was a tropical paradise, and Saudi Arabia is working toward bringing it back to its former glory.

Saudi Arabia is the 9th most powerful nation in the world and one of the most water-scarce nations on the planet.

Surprisingly Saudi Arabia is behind only the U.S. and Canada for per capita water consumption. The Kingdom uses 4 times as much water as it can renew. Plus, it uses 2x the water of an average nation per capita.

Major conservation efforts are at work to protect their other vital resource as water is essential for making the region green again – and to go net zero.

With the proceeds of their remaining oil, Saudi Arabia is now starting to drill for their next precious resource behind oil – water.

The more water they stockpile the greener their country and economy can be.

The image below looks like an alien crop circle, but these are essentially carbon crop circles.

This “Center Pivot Irrigation” technology was developed in the US and requires less water, resources, and maintenance.

Water is pumped up from underground river channels and aquifers from depths of 1km (0.6 mile).

Each circle will be able to generate carbon credits after the soil begins to take root again and as they begin to store more carbon (and water) in the plants and soil.

Yet, they will run out of water underground eventually, so they need new sources of water.

Making Water from the sea and the sky

Constructing dams can capture the rainfall surges from storms to be used later. Countries have also been exploring making their own storms using “Cloud Seeding”.

Cloud seeding works by shooting salt flares into the clouds. As salt naturally attracts water, the water particles collide with others to help with rainfall.

They have announced the world’s first Solar Power Desalination Plant. This cutting-edge technology is the most efficient desalination project yet.

Carbon credits are now available for desalination plants that switch to renewable power.

Scientists are even working on creating carbon-negative desalination plants, so they suck up more carbon than they emit. 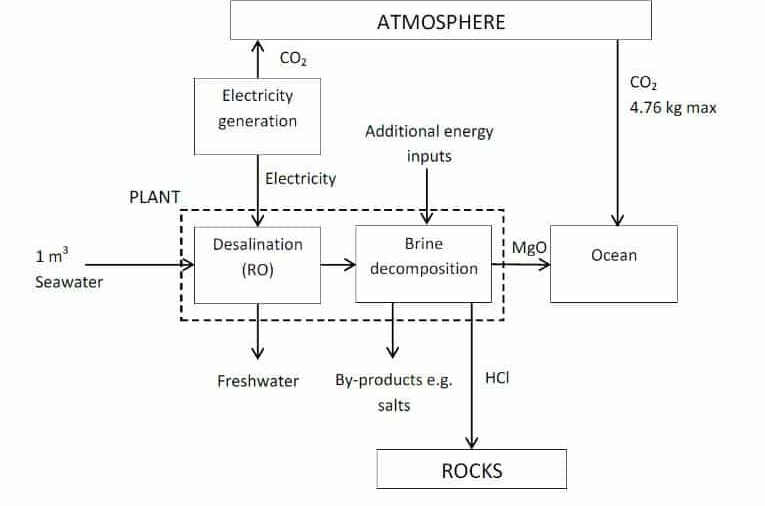 The concept is to take advantage of the magnesium by-product in the concentrated brine which the desalination plant rejects. This is still in the very experimental stages, but it could show some promise in the future.

Large wind farms mix hotter air from above with cooler air below, which brings slightly more initial heat to the ground. The turbines also interrupt the smoothness of the desert wind. This slows the wind speed and traps that heat further.

The trapped heat changes the atmospheric conditions above and can double the typical rainfall (in lab simulations).

The rain helps plants grow, and as they begin to take root, they also provide more green cover. The green cover lowers the amount of sun reflected off the desert surface. And so, it helps bring in more rain.

Solar farms can decrease the amount of sun bounced back into the atmosphere even more.

By combining large-scale solar and wind projects, has the potential to change the local climate.

And Saudi Arabia recently announce they are doubling its investment in renewables.

They are planning massive projects using clean energy such as the world’s biggest solar thermal plant and the region’s largest wind farm.

These initiatives will heat up the ground temperature in the remote agricultural/carbon farm areas. They’ll also produce more rainwater, making it more and more like the lush tropics.

They’re also planning to create a massive climate-controlled futuristic and green megacity called NEOM, in another region of the country. This NEOM project will be carbon neutral and net zero water – more on the NEOM project here.

With the ability to purchase and fund carbon projects across the world, it raised the question “Are local carbon credits better?”.