Are Carbon Offsets a Scam? Key Points to Consider

The world’s acceleration to corporate Net Zero has come under fire. Some critics argue that carbon offsets are a scam, but there are several key points to consider in the debate.

By definition, carbon offsets are valuable certificates that are issued when carbon is removed or prevented from entering the atmosphere. That’s done through carbon removal technologies, by pumping CO2 into rocks, or even by planting trees.

In fact, producing and selling carbon offsets is becoming a lucrative business in the U.S., and first movers have a big advantage. Small farmers, ranchers, and landowners can earn extra income by optimizing their operations to produce carbon offsets.

When checking for legitimacy of markets, following capital flows and transactions provides clues. There are two main emissions markets – the compliance carbon market and the voluntary market. 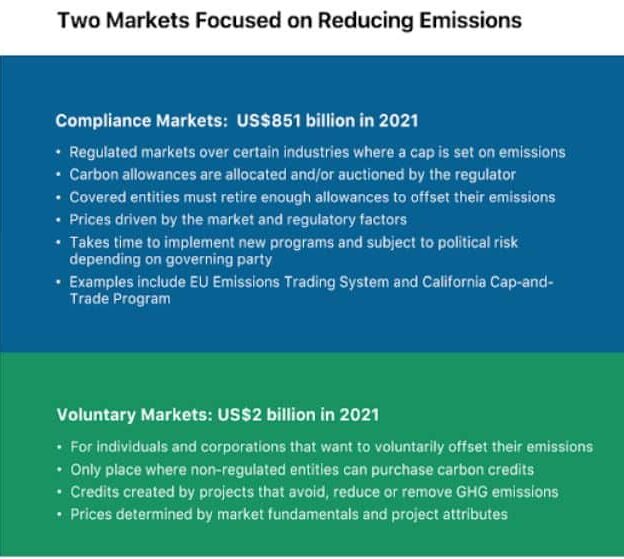 The Voluntary Carbon Market is one of the fastest growing markets in global capital. It has grown from nearly $300 million in 2019 to an estimated $1.8 billion in 2022.

The arguments that carbon offsets are a scam are not shared when looking at corporate net zero pledges. According to Katusa Research, the number of companies that publicly declared net zero targets reached 3,152 in November 2022.

Companies like Netflix, for example, have excellent net zero and emissions reduction plans:

“By the close of 2022, Netflix will achieve net zero greenhouse gas emissions. To reach this goal, we are working towards reducing our internal emissions by 45% below 2019 levels by 2030”

There are many other global companies that disclosed their net zero targets and how to get there. UK’s Royal Mail, Stellantis, Pfizer, Levi’s, Del Monte Foods, among many others, have pledged to hit net zero.

Consider one Tesla’s sources of revenue (and profit) has been the sale of carbon offsets. In Q1-2022 for example, Tesla earned $679 million in carbon credit sales.

A company that emits a certain amount of carbon dioxide through its operations can offset those emissions by buying carbon credits. They come from a project that reduces carbon emissions elsewhere, such as a renewable energy project.

A farmer can’t just create thousands of carbon offsets from his or her land by planting trees. There is a stringent carbon verification process and typically performed by one of the larger global services – like Verra and Gold Standard.

Carbon offset programs are regulated by third-party organizations that verify the validity and effectiveness of the offsets purchased. For example, the Carbon Offset Integrity Standard (COIS) is an international standard that ensures carbon offset projects are real, permanent, and additional.

Verified carbon offsets are definitely not a scam. Let alone the benefits they offer that can be environmental, social, and economic.

For example, many carbon offset projects support the development of renewable energy, such as wind and solar power. This not only reduces carbon emissions, but also helps to diversify the energy mix and reduce reliance on fossil fuels.

Otherwise, the BMO would not be confident in projecting that the market will grow 17.4x by 2050, relative to its 2020 traded volumes. And as more players and money are flooding the voluntary carbon market, its value seems to grow even more.