Bloomberg to Form Global Carbon Trust to Scale the VCM

On the first day of the COP27, Michael Bloomberg’s charitable organization and Three Cairns Group revealed plans to form the Global Carbon Trust (GCT) to help scale up the voluntary carbon market (VCM).

Three Cairns Group is a mission-driven investment and philanthropic firm. It seeks to build and support innovative platforms and initiatives to speed up climate action.

The two firms will establish the GCT and the Carbon Storage Governing Council (Governing Council). The initiative will provide governance, boost the supply of projects, and promote standardized financial contracts to attract market participants.

The chart below shows the potential voluntary demand scenarios in 2030 and 2050. 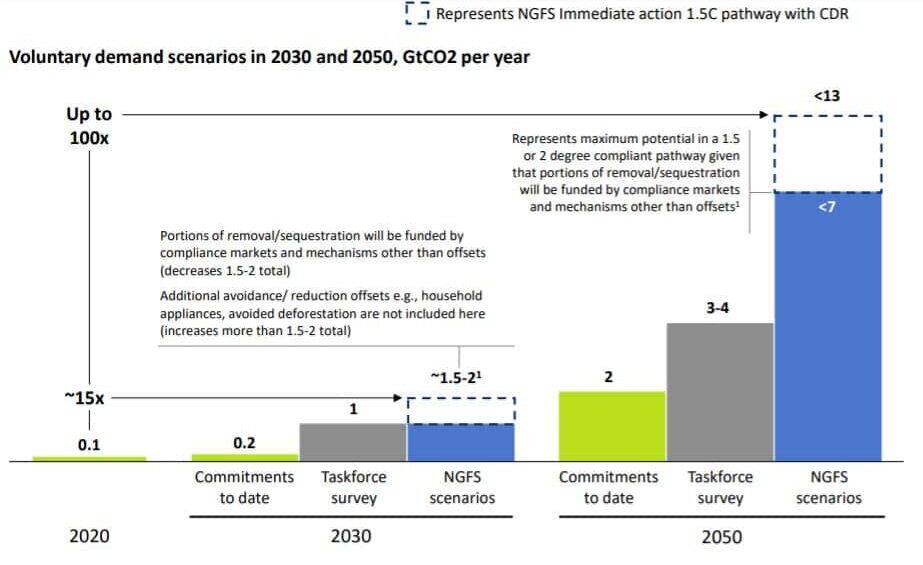 There has been significant progress made by the private sector in improving governing principles, standards, and quality of carbon credits. But the VCM still lacks enough infrastructure that underpins traditional financial markets like standardized, incentive-based contracts.

There are a lot of potential buyers of carbon credits as part of their net zero pathways. But some of them hesitate to participate in the market because of these reasons:

Add to this the concern about carbon credit verification delays that is costing project developers $2.6 billion. This also limits the innovations essential to enable sellers to bring supplies of high-quality carbon credits to the VCM.

This is where the Global Carbon Trust comes in to supplement the current state of the VCM. The initiative will offer an effective means to manage the supply and liquidity of carbon credits.

“…To reach its potential, the VCM will need greater rigor, data, transparency, ongoing measurement, and capital. The mission of the GCT is to augment and improve existing carbon markets and enable the VCM to scale to its needed size.”

Michael R. Bloomberg, Founder of Bloomberg Philanthropies, also noted that an efficient VCM is crucial in fighting climate change. It offers a powerful way to pump more money into projects that cut emissions. He further added:

“…Turning climate commitments into smart investments that make a real difference requires transparency, accountability, and reliable data, all of which the Global Carbon Trust will help bring to carbon markets.”

The Governing Council will work with the GCT. Representatives to the council are from academia, industry experts, and civil society.

As one of the working groups, the council will aid GCT in performing its tasks in scaling up the market. With its establishment, the organization can achieve its initial focus. This includes the development of fixed-term contracts and carbon credit projects.

The Global Carbon Trust will also build on key elements of the VCM. These include boosting revenue from carbon storage to help fund projects with other benefits, not just emission reductions.

Through the GCT, private institutions, carbon registries and verifiers, brokers, and exchanges will all continue to play their vital roles in the functioning of the VCMs.

Key Functions of the GCT

Through the following functions, the Global Carbon Trust hopes to be a source for transparent carbon market data.

With the above tasks, the GCT aims to minimize greenwashing, mitigate risks, and improve market credibility.

Three Cairns Group and Bloomberg Philanthropies look forward to engaging with various parties inside and outside the COP27 summit as they establish the GCT and the Governing Council.

Both initiatives will start working in the coming months, with more updates expected in 2023.