Carbon credits, also called carbon offsets, have a crucial role in reaching net zero emissions goals. And while each carbon credit is not created equal, they all start in the same place and go through a similar lifecycle process.

So, whether you’re directly reducing footprint or supporting projects that cut emissions somewhere else, offsets let you do both.

In this article, we’ll explain what happens during the entire carbon credit lifecycle, from point of creation to retirement. We’ll explore where carbon offsets come from and take a look at key players or parties involved.

Tracing the Lifecycle Stages of a Carbon Credit

A carbon credit is also referred to as a carbon offset in the voluntary carbon market. Individuals or firms can use the credits to voluntarily offset their carbon emissions.

Each credit represents a tonne of carbon reduced or prevented from entering the air.

As such, offsets act as a means that help tackle climate crises while allowing different entities to use them, regardless of location.

The life of a carbon offset goes through four general stages:

Let’s trace the lifecycle of a carbon offset credit while identifying the parties involved in each stage.

1. The conception of a carbon offset: Project Developers

Carbon emission reductions happen all the time, but not every reduction qualifies as an offset.

The term “methodologies” may sound complicated. But they refer to the detailed procedures that developers use to quantify a project’s emissions reduction potential.

They’re also known as protocols, the blueprint for how various project metrics are calculated.

Each carbon project is unique, be it renewable energy or agricultural project. And so developers have to take several variables into account when developing them. They begin the process by designing the project and formalizing it in a Project Design Document (PDD).

Using a specific methodology, they then outline the project activities in the PDD. Some of the approved methodologies and protocols include:

Next, project developers establish a baseline of emissions reduction which is for assessment by a 3rd-party body. This is the 2nd stage of the carbon credit lifecycle explained in the next section.

Once the reduction impact of a project has been assessed (via a certain methodology), the developer now holds the carbon rights to that project.

Of course, the work of a project developer, whether it’s an individual or an organization, doesn’t end there.

They have to register the project with an approved registry like the Verra. This body tracks offset projects and issues their corresponding credits. More on this in the 3rd stage of the lifecycle process.

Monitoring involves keeping track of the updates or progress of the project metrics. While reporting involves preparing the necessary documents about the project.

Right now, there are 170+ types of projects that produce carbon credit offsets according to Ecosystem Marketplace. But they fall under eight major categories as shown below. 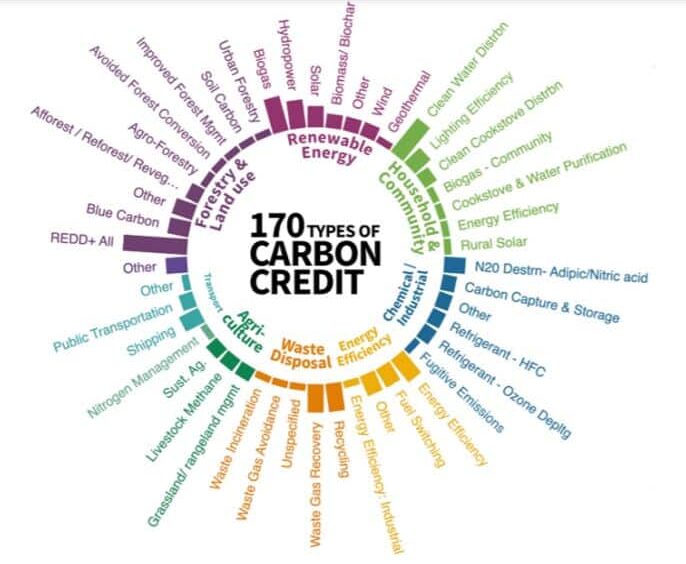 2. The birth of a carbon offset

The second stage in the life of a carbon credit offset is undergoing a validation and verification process. Under this step are two responsible parties.

The Job of 3rd-Party Auditors

The first one is an independent, 3rd-party auditor also called the validation/verification body. This body comprises subject matter experts who can validate a project’s emission reduction claims, both projected and actual achievements.

Essentially, the VVB validates the following elements of a carbon offset project from the developer’s document:

Auditors ensure the integrity and accuracy of the data and information published by the developer on the project. Some of the widely known carbon project auditors are QAS, EPIC Sustainability, First Environment, and SCS Global.

Upon successful completion of the validation, the auditor will issue a validation report and validation statement. These documents confirm that the project has been designed and implemented in accordance with the carbon certification standard.

Verification is key when it comes to ensuring that project data reported is true, transparent, and has integrity. In other words, it’s verifying that the project is actually doing what it says it’s doing.

Verifiers have to confirm that a proposed project meets a carbon program’s eligibility criteria. They can then verify by confirming that project monitoring data was collected in accordance with a program’s requirements.

They also verify that the calculations of the project’s emission reductions were done based on the approved methodology/protocol.

After the project has been validated and verified, it’s now ready for registration.

But wait, there’s another key party to consider to ensure the quality of the carbon credit – the carbon ratings agency.

The Role of 3rd-Party Rating Agencies

Carbon rating agencies rate or score the likelihood that the carbon offsets issued via the project have indeed reduced a certain amount of carbon or its equivalent.

Different rating agencies use various frameworks or criteria in providing their scores. Some rate using an alphabetic scale (e.g. BeZero) – AAA, AA, A. Others give their ratings by using the scale of A (highest rate) to D (lowest rate) like how Sylvera does.

Projects must meet specific criteria to be eligible for a rating by an agency. While the criteria may vary, in general, projects must satisfy at least 3 things: carbon score, additionality, and permanence.

Also, rating agencies also require that the project has been audited as part of their scoring framework. Plus, there should be enough information on the project design and monitoring process available to base the ratings on.

Here’s an example of how Sylvera rates ARR projects.

Now that it’s officially (and proudly) born, the carbon credit offset can now move on with its life.

This stage in the carbon credit lifecycle involves the carbon registries.

Registering a carbon offset project in an approved registry is easy if the previous steps above are taken into consideration.

Projects are certified and issued carbon credits called in various names, depending on which registry they’re registered in. For instance, under the Verra VCS program, the credits are called Verified Carbon Units or VCUs.

Under the Gold Standard offset program, they call carbon credits Verified Emission Reduction or VER. While Climate Action Reserve refers to them as Climate Reserve Tonnes or CRT.

Each offset represents a reduction or removal of one tonne of CO2 equivalent achieved by the project.

The procedures to follow to get a project registered, certified, and issued with credit offsets depend on the specific registry chosen by the developer. The same goes for the rules or requirements provided.

Once the offset credits are issued to a project, they can now be in action. That means developers can look for their buyers in the carbon market.

End buyers can be individuals, corporations, and governments. Buying carbon offsets can happen out of compliance to laws (compliance/regulatory carbon market). Or it can also be a voluntary decision to tackle emissions (voluntary carbon market).

Heavy industrial emitters are the major buyers of carbon offsets as part of their compliance requirements. But plenty of large firms are also buying because of their climate commitments.

If you prefer to buy offsets directly from project developers, you can do so.

Yet, buyers can also get offsets from brokers, traders, and exchanges. They can then use those offsets to address their current emission reduction measures.

But there’s another way to make money out of trading carbon credits. It’s via speculative marketplace/exchanges and carbon ETFs.

Speculative investors buy offsets through futures contracts with the intention to sell them later at a higher price, hopefully.

No matter how or where the carbon offsets are bought, once they’re used and reported as emission reduction, they should be retired.

Retirement of offsets also means their death. They should not be around anymore and are not for resale. They must serve their emission reduction purpose only once to avoid double counting.

That also means removing them from the marketplace and labeling them as retired in any records.

A retired carbon credit offset can now say goodbye to its not-so-popular yet critical world of reducing emissions.

If you’re interested to know more about carbon offsets, read our primer here. Or if you want to learn how to make money with them, go over this comprehensive guide.