The 4 Best Carbon Offset Programs for 2022

You’ll learn the important concepts, which carbon offset program should you choose, and why investing in this space matters.

What is a Carbon Offset?

First things first. We need to define what does it mean by a carbon offset.

And so carbon offsetting means financially supporting a project that can reduce emissions.

Carbon offsets are produced by companies that remove CO2 from the atmosphere. The offsets are then sold to firms that emit (or have emitted) CO2 into the air.

In a sense, you can think that offset-producing entities are funded by companies that emit CO2 or its equivalent.

Trading of carbon offsets happens both in the compliance carbon market (regulated by the government) and in the voluntary carbon market (VCM) where bulk of them are sold.

A very identical concept to carbon offsets is carbon credits. While both terms are created for the same goal – to abate climate change – carbon credits are originally created through government regulations.

The government limits the amount of GHG that companies can emit by setting a cap on them with certain tons of CO2 emissions they’re permitted to emit. These allowed emissions correspond to carbon credits.

Same with a carbon offset, one carbon credit equals one ton of CO2 reduced or removed.

Below is the rising trend of voluntary carbon offsets issued since 2005 in metric ton CO2e. 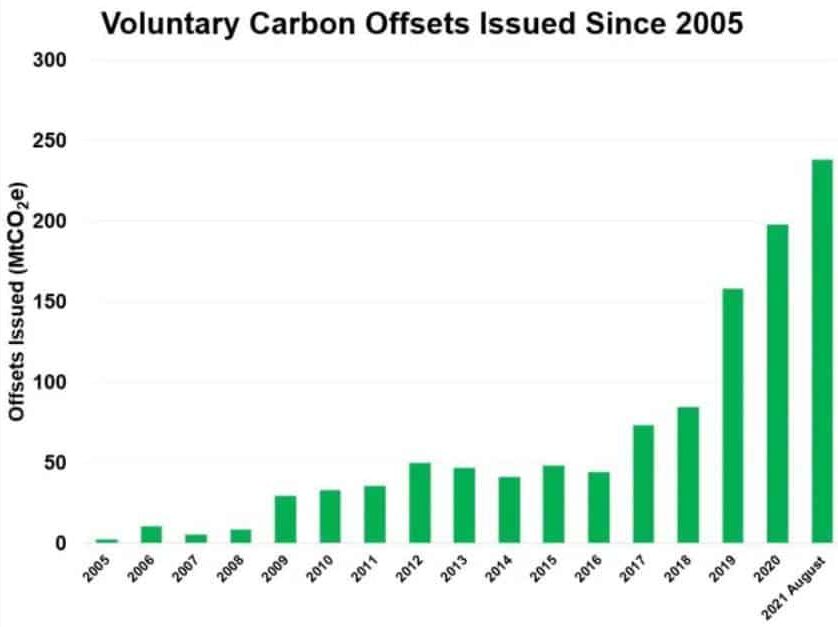 A carbon offset project is an initiative developed to reduce actual GHG emissions. It can be in any sector, agricultural to industrial.

The best carbon offset programs are also known as carbon standards or registries. They allow individuals or companies to invest in carbon offset projects locally or internationally to balance their carbon footprint. They ensure that the projects are trustworthy.

Here are the four largest and best carbon offset programs for 2022 that you can find in the market. They all have a solid track record of performance that you can verify.

Let’s discuss each one of them in detail so that you know which one fits for your carbon offsetting needs.

Verra is a non-profit organization headquartered in Washington, D.C. Since it was launched in 2006, Verra’s VCS is the most known voluntary carbon offsetting program available today.

It’s the world’s most widely applied program and you’re most likely familiar with its logo. It appears when you decide to offset your carbon footprint when buying airline tickets.

To date, Verra has more than 1,806 certified VCS projects that collectively reduced or removed over 928 million tons of CO2 and other GHG emissions. The VCS program allows certified projects to turn their GHG emission reductions and removals into carbon credits.

The Program focuses on GHG reduction attributes only and does not require projects to have additional environmental or social benefits. It’s supported by the carbon offset industry players – project developers, big offset buyers, verifiers, and projects consultants.

The projects in Verra’s carbon offset program fall under 15 major sectors. They all undergo Verra’s rigorous rules and requirements. They include a number of technologies and measures that reduce or remove CO2 and other GHGs.

When it comes to renewables, here’s Verra-certified credits by country from 2009-2021.

Same with the other best carbon offset programs for 2022, Verra issues a unique number to each carbon credit generated by an offset project.

These numbers are called Verified Carbon Units, or VCUs. Individuals and companies wanting to offset their emissions can buy these credits in various carbon exchanges in the VCM.

These projects have the potential to reduce or remove over one billion tons of CO2 from the air each year, all while restoring ocean ecosystems.

How does the VCS process work?

A process exists for approving GHG programs that meet VCS Program criteria. The project/program should meet the following criteria:

If an entire offset standard is adopted by the VCS, all the auditors and methodologies are automatically accepted. Also, credits certified by that standard can be fungible with VCUs.

The Gold Standard (GS) is a voluntary carbon offset program unique from others. Unlike Verra, it puts the UN Sustainable Development Goals (SDGs) front and center when certifying offset projects.

GS was developed with the leadership of the World Wildlife Fund (WWF), HELIO International, and SouthSouthNorth. It focuses on offset projects that provide lasting social, economic, and environmental benefits.

Also, the GS program is applicable to both voluntary offset projects and to Clean Development Mechanism (CDM) projects.

The GS CDM was launched in 2003 after a 2-year period of consultation with stakeholders, governments, non-governmental organizations, and private sector specialists from over 40 countries.

The GS for voluntary offset projects also known as GS Verified Emission Reduction or VER was launched in 2006. The project registry which contains all projects implemented through the GS program took off in 2018.

For a carbon offset project to be accepted by GS it must perform assessment of its community impact. It must also ensure that populations nearby are also benefiting from the project.

In general, offset projects need to contribute to at least 3 out of 17 UN SDGs to be certified. And like other best carbon offset programs in 2022, GS projects fall under these major categories:

Most of the GS projects are in developing, low, and middle-income countries.

Why offset with Gold Standard?

In a word, impact. This means that every dollar, Euro, pound or peso you spend offsetting creates more value for local communities and ecosystems. It also contributes in a measurable way to the UN SDGs.

The Gold Standard is considered one of the most rigorous carbon credit programs for 2022. In fact, over 80 NGOs are endorsing it, including the David Suzuki Foundation and WWF.

You can directly support projects certified by Gold Standard through its site. Prices vary per type and purpose. You can also buy credits for Gold Standard–verified projects through various carbon retailers or exchanges.

Climate Action Reserve began in 2001 as the California Climate Action Registry. Its mission is to encourage companies and other organizations to measure, manage and reduce GHG emissions.

The CAR is a national offsets program focused on ensuring environmental integrity of GHG emissions reduction projects. Its main purpose is to support financial and environmental value in the voluntary carbon market. CAR does that by:

CRTs are developed and quantified using project protocols. Adherence to these standards ensures emissions reductions are real, additional, and permanent.

CAR registers and certifies carbon offset projects based on their permanence. Their GHG reductions must also be accounted for and audited.

And same with Gold Standard, CAR also considers the project’s social and economic benefits. But not all carbon offset programs in 2022 do that.

Most of CAR’s projects include:

They’re in the United States but CAR also certifies projects in Canada and Mexico.

All carbon offset credits generated by CAR-certified projects are given a unique serial number. This helps tracking each project effectively.

More importantly, the number assures buyers that a “retired” credit isn’t eligible for selling or transferring. Retired means credits have already been used to offset emissions.

All project information is publicly available in the CAR system.

CAR doesn’t sell carbon credits directly to consumers. To buy carbon offset credits, you’ve to go directly to a retailer. Then look for the CAR seal of approval.

CAR’s emission reduction program has been approved under the Verra’s VCS. CRTs issued by the Reserve can be converted into Verified Carbon Units (VCUs) and transferred to a VCS registry. But VCUs cannot be converted into CRTs.

ACR is a pioneer on the voluntary emissions and carbon market. It was founded back in 1996 by the Environmental Resources Trust (ERT) as the first GHG registry.

The registry became the American Carbon Registry (ACR) in 2008. And in 2012, ACR was accepted as an approved Offset Project Registry by the California Air Resources Board (CARB). It’s the regulatory body of the California cap-and-trade offset credit market.

ACR operates in both voluntary and regulated carbon markets.

Projects certified by the ACR are found worldwide and include the following:

It also supports projects that offer farmers financial incentives to voluntarily reduce emissions by curbing their use of nitrogen-based fertilizer.

ACR isn’t only the oldest kid on the block when it comes to carbon offset programs. It’s also trusted by the ICAO or International Civil Aviation Organization to supply emission reduction units for the Carbon Offsetting and Reduction Scheme for International Aviation (CORSIA).

It’s a scheme that can offset 2.6 billion tons of carbon over the next 14 years.

As with Verra and CAR, you’ll need to visit a carbon retailer or exchange to buy carbon offset credits from ACR-certified projects.

ACR methodologies and protocols are all based on International Standards Organization (ISO) 14064. The program allows project developers to use methods and tools from the CDM. But as long as they go with the ACR’s own standards.

Projects may be transferred between ACR and another registry provided all unsold, non-transferred, and non-retired offset credits are canceled. 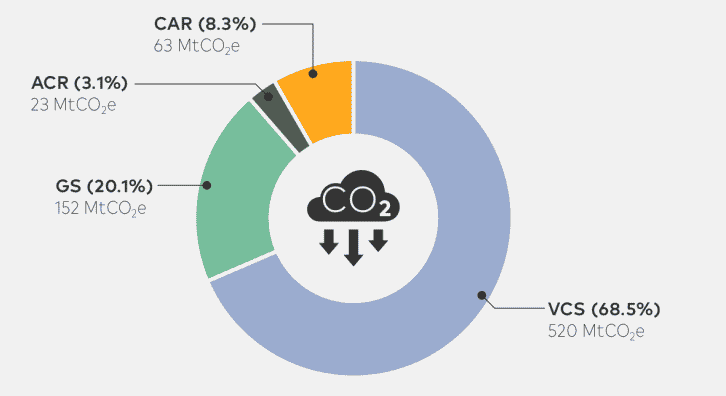 In summary, the table below shows the key comparison among the 4 best carbon offset programs to consider in 2022.

So, why does offsetting your carbon footprint matter?

Take note that offsets aren’t a replacement for actual emissions reduction. BUT they can make a big difference in helping the fight against climate change.

By deciding to buy carbon credits through any of the carbon offset programs above, you’re helping a project remove or prevent planet-warming emissions.

The best part is that buying carbon offset credits will eliminate the last traces of your carbon footprint. For companies, this means addressing their unavoidable emissions.

So, investing in carbon offset credits hits two birds with one stone. It allows you to help people who benefit from the projects and help protect the planet at the same time.

Here’s our complete guide if you want to learn more about investing in carbon credits and carbon offsets.