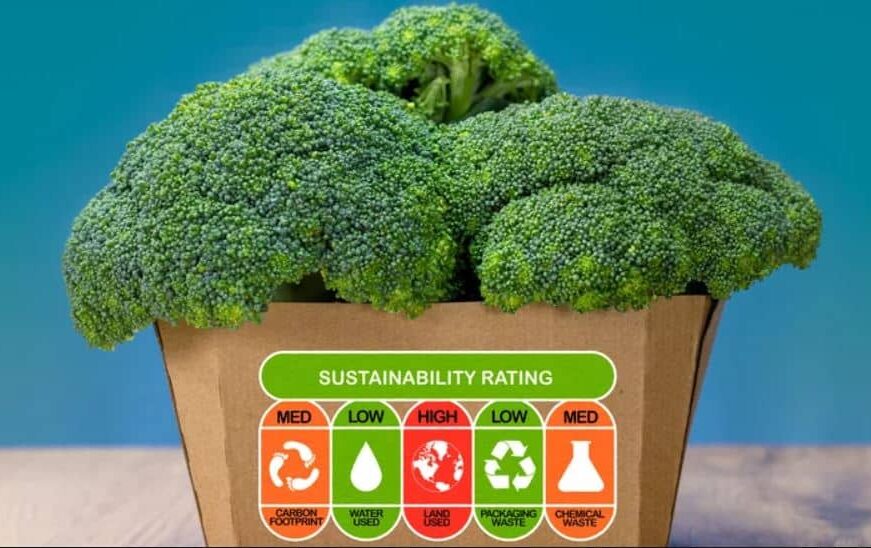 Menus around the world have begun showing calories for items, are food carbon footprint labels next?

A food’s carbon footprint is the GHG emissions produced from growing to disposing of the food we eat. This also includes rearing, farming, processing, storing, transporting, and cooking a specific food.

The participants of the COP26 climate conference were some of the first ones to see food items, from salads to beef burgers, labeled with their carbon footprint (represented by the kilogram of carbon emitted per menu item).

Why Put Labels on a Food’s Carbon Footprint?

The food activist Klimato was partly responsible for coming up with this food carbon footprint label idea after they discovered that food generates over ⅓ of the world’s carbon emissions.

Likewise, scientists are considering if carbon labels on food items may help consumers make more informed decisions. And that involves both the food they eat and the ingredients they buy.

A recent study, showed that people chose the climate-friendly options when carbon labels were shown and also when lower-emission options were the default.

The chief scientific adviser for the UK Food Standards Agency Robin May, for instance, said that:

“People are much more attentive to food now… We know that a very significant portion of the population has shifted their diet or tried to shift their diet in the last 12 to 18 months to become more sustainable… Consumers have a right to honest, transparent labeling of food.”

A 2020 survey for Carbon Trust supports May’s claim. It found that over 66% of consumers in the UK, US, Germany, and other European countries are supportive of carbon labels on food items.

But access to reliable data is critical as remarked by the CEO of CarbonCloud. It’s a climate change research firm that measures a food’s environmental impact.

The carbon emissions label captures all GHG emitted such as CO2, methane, and nitrous oxide.

Meat has the highest carbon emissions, followed by dairy products. The lowest carbon footprint is fruit and vegetables.

What’s Next for Food Carbon Labeling?

Some companies are hesitant to display the carbon footprints of their products, while others are embracing the change.

Oat milk company, Oatly has carbon labels already on its products. Also, plant-based food group Quorn has put carbon data on some of its products in 2020 and aims to do so for the rest by the end of this year.

Denmark also has pledged to spend $1.3 million to develop food carbon labeling proposals by the end of the year. It will be one of the first nations to do so.

As the climate impact of food becomes clearer, consumers tend to consider how they can shift their diets. The carbon-labeled food menu served during the COP26 prompted some delegates to opt for items with the lowest carbon footprint.

For food companies, this could mean having carbon labels on their items may catch the attention of climate-conscious buyers or diners.