The Dawn of the Carbon Credits Age 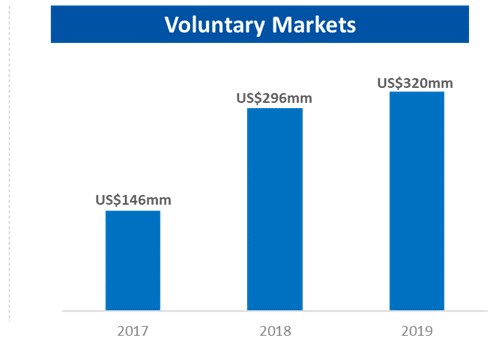 Fueled by climate change and the now unstoppable global trend of decarbonization, carbon credits are gaining a momentum that will carry them into every area of human life in the coming years.

If you’re looking at this market for the first time, let’s cover some basics. Every person has a carbon footprint. While the numbers vary dramatically from country to country, a person in Canada or the U.S. is responsible for around 15.5 tonnes of carbon dioxide emitted each yeari. That means, should you live to 90 years of age, you’ll have been responsible for generating around 1,395 tonnes of carbon dioxide, or the equivalent emissions from 300 passenger vehicles in one year.

Obviously not every activity emits an equal amount of carbon dioxide and some activities, like planting a tree, actually have the opposite effect by absorbing carbon dioxide from the atmosphere. And thus we enter the world of carbon taxes, carbon pricing and carbon credits.

Carbon credits (also known as carbon offsets), which have been around for over fifteen years, have a straightforward goal: penalize polluters and, by doing so, apply pressure for change. The approach is even more simple: make carbon emissions more expensive so that companies find ways to reduce or eliminate their emissions.

Of course, not every industry can move to a carbon neutral business model at the flick of a switch. Think, for example, of companies still reliant on fossil fuel for electricity. This is where the carbon markets step in by enabling companies to purchase carbon credits to offset those emissions that they cannot yet eliminate.

Reducing their carbon footprint in this way helps some companies avoid penalties or fines. Critically, it also appeases shareholders and consumers.

The Compliance and Voluntary Markets

There are two types of carbon markets: Compliance and Voluntary. In 2020, the Compliance carbon markets grew by 21%, with transactions totaling over US$260 billionii. The Voluntary carbon markets, estimated at US$320 million in 2019iii, need to grow by 15x by 2030 to support the investment required to meet the goals of the Paris Agreement.

So how do they differ? The Compliance markets, like those operated by the European Union and the State of California are very much a government-created cap and trade scheme. While speculation is allowed, these are carbon markets for companies in industries where governments are actively trying to reduce emissions, such as power generation or transportation.

One: Shareholders are demanding it. Climate change is the #1 issue for ESG asset managers in the U.S., and large asset managers like BlackRock and Vanguard have pledged net-zero emissions across their portfolio holdings by 2050 and are holding companies accountable to climate goals. Recently, shareholders replaced three Exxon Mobil directors seen as insufficiently addressing climate change, while Chevron shareholders approved a proposal for the company to reduce emissions from customers use of its fuel.

Two: Consumers are demanding it. People have begun to think about how their personal consumption impacts climate change. A growing number of people are willing to pay a higher price for a carbon neutral product or service or pay directly at check-out to offset the carbon footprint of their purchase. In doing so, they are supporting the carbon markets as they demand climate action from the companies that they use.

Three: Regulators are requiring it. Legislation has already been introduced in a number of countries that require companies to disclose climate risk. Following a meeting earlier this month, the leaders of the G7 – a group of advanced economies, including the United States, the United Kingdom, Canada, France, Germany, Italy, and Japan – all agreed that “mandatory climate-related financial disclosures” should be implemented. Many companies will soon be faced with mandatory climate disclosures and will look to the voluntary carbon markets to purchase carbon credits to offset their emissions or face reputational risk.

Putting a price on carbon credits

Prices for carbon credits vary depending on several factors. For instance, while a tonne of carbon dioxide remains a tonne the world over, depending on where it originates, what the nature of the project is, and other factors, price can vary significantly. Many carbon credits also have co-benefits, such as preservation of biodiversity or job creation, which can attract premium pricing.

There are also different certification bodies that validate the quantity and quality of carbon credits. Vintage, which refers to the year the emission reduction occurred, also influences the price. Carbon credits are listed on a registry and can be held or sold more than once, however, once it is used to offset an emission, it is retired and cannot be resold.

Carbon Streaming Corporation (NETZ:Canada, OFSTF:OTC) aims to give investors exposure to both the voluntary and compliance carbon markets.

We are investing in high quality, high profile projects that will generate a strong flow of carbon credits over multiple decades. Our investments will deliver a “stream” of carbon credits that we will then be able to sell in the voluntary carbon markets or hold on to for long term price appreciation.